Draw Your Own Conclusions, Unobstructedly

Growing up in America, I admittedly rarely paid attention to politics. I never used to evaluate the credibility of media sources, and never considered how truth can be perceived — and spun — in different ways. In the United States, much of the information dispersed by media is sensationalistic and based on opinion. This is why it’s more important to discover your truth than ever.

Just turn on CNN or Fox News on your TV. You will rarely hear neutral reports. Instead, emotionally-charged language is used. Guests speak passionately — usually with rage — furthering the division between the two parties of the United States.

Everything from our education system, to what we see on TV when we watch the news is biased. Don’t get me wrong — you can make the argument that everything is inherently biased, and there’s no way to be 100% objective. But it seems we now live in a time of “wrongthink” where certain ideas are excluded, certain information is being hidden.

In fact, a survey from the Pew Research Center has found that, “roughly three-quarters of U.S. adults say it is very (37%) or somewhat (36%) likely that social media sites intentionally censor political viewpoints that they find objectionable.”

One example of our skewed education system comes from the AP Comparative Governments class in high school. In this class, I was taught that all information in Russia is filtered and run by the state. I was taught that they don’t report the truth, and that they censor the media.

This was to be memorized and thought of as fact, which is absurd. Since I haven’t traveled to Russia, don’t speak Russian, haven’t viewed Russian news in Russia, or spoken with Russians on this subject, it was impossible for me to form a more objective perspective on this.

Couldn’t you argue that in America the truth isn’t always reported? That censorship occurs?

There is objective truth — reality. Then there are our subjective interpretations. Realistically, every “truth” is infused with our own biases (which is why I entitled this “Discover Your Truth” and refrained from using the article “the” which would imply there is an entirely objective truth we have access to).

After traveling the world, I found it peculiar and frustrating that memorizing potentially false perceptions as fact was part of the curriculum in public schools. No criticism was allowed — our assignments were based on memorization of these so-called facts, and deviating from them meant sacrificing our grades.

I stumbled upon a very telling passage. The title of the book is a bit controversial, and I haven’t even read more than a few pages. It’s from “Who’s Running America? The Obama Reign”, which analyzes the effects of elitism and monopolies during recent years in American history (note: despite the title, it’s not just aimed at Obama, but criticizes the Bush years as well), there is a passage as follows:

“The people who control the flow of information in America are among the most powerful in the nation. Television network broadcasting is the first form of truly mass communication; it carries a visual image with emotional content as well as information. Television news reaches virtually everyone,and for most Americans, it is the major source of information about the world.
The power of media is primarily in agenda setting — deciding what will be decided. The media determine what the masses talk about and what the elite must decide about. Political issues do not just “happen.”

The media decide which issues, problems, even crisis, must be acted upon.
Control of the nation’s news and entertainment is concentrated in a small number of media empires. These empires now combine television, motion pictures, magazines, books, music sports and recreation, and the Internet — virtually all forms of mass communication.TIme Warner is the nation’s largest mega merged media conglomerate…

Despite multiplication of media channels, great power remains lodged in the leading television networks (ABC, CBS, NBC, and CNN), together with the national press (the New York Times, the Washington Post, and The Wall Street Journal)…”

In other words, the media is a highly-centralized business in the US.

Issues are only issues when the media says so.

When You Travel, The World Becomes Your News Source

This is why travel is so important. When you travel, you authentically see and experience the lives of refugees, for example, that you interact with on the streets and in immigration offices. You see first hand the effects of war and can evaluate the reality of situations without it being filtered by major news networks in the United States.

Travel broadens your scope of the world. You transition from an outside-looking-in perspective to one that’s inside, nearer to reality. You pop the information bubble that contains you. You discover your truth.

Form your own first-hand accounts through travel.

Thank you for reading my story. Follow me for more stories & updates, and browse my books here. Disclosure: This story may contain affiliate links.

The 7 Most Fascinating Northern Italian Towns Worth Visiting

The Mountainside City in Italy Famous for High Quality of Life 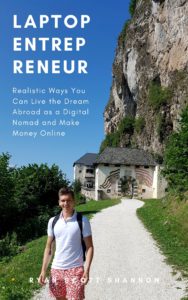